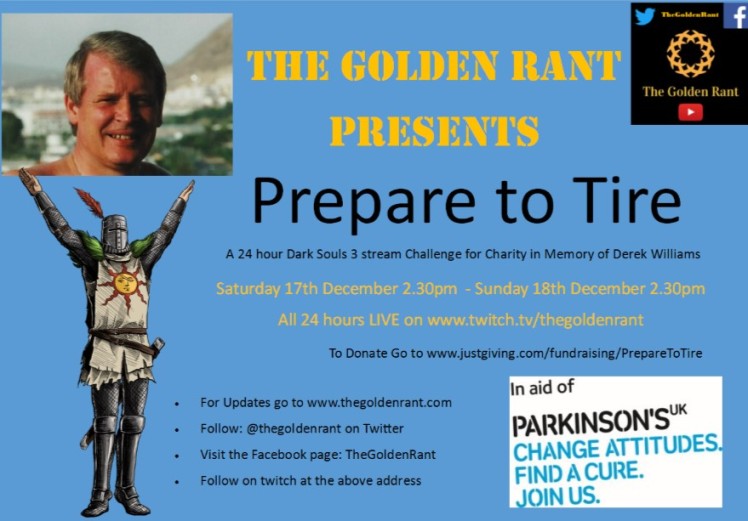 The Golden Rant is proud to be hosting its very first Charity Fundraising Livestream.

On Saturday 17th of December Thomas and Sophie Cottam will be raising money for Parkinson’s UK in loving memory of Sophie’s father Derek Williams who sadly passed away on the 25th October after suffering from Parkinson’s Disease.

Thomas and Sophie will be aiming to play Dark Souls 3 for 24 hours to both raise money and raise awareness for Parkinson’s UK.

An initial aim of £250 has been set as our goal but anything anyone can donate at this busy time of year would be greatly appreciated and will make a difference to a Parkinson’s sufferer somewhere.

My Wife and I would like to thank everyone who shares this page and raises awareness, and those who donate to our cause.  Many thanks to you all – Thomas Cottam

‘My Dad, Derek, was diagnosed with Parkinson’s Disease when he was only a mere age of 55. He enjoyed the years before the condition affected him with spending quality time with family and friends with walking trips, skiing in the French Alps, cooking his famous hot curries, holidays abroad and many more. My Dad had a brilliant sense of humour, was strong willed and always had a good bill of health before the condition affected him thus taking away the person that all his family and friends all knew and loved.

Unfortunately when his condition became worse he was limited to how many things he could enjoy out of life, not being able to walk my sisters and I down the aisle on our wedding days, unable to attend Graduation days and missing out on certain special occasions as it became a strain on him physically that made him become fatigued and was limiting with mobility. Medications would help to slow down the process so he could enjoy the time he had but could not cure what had taken a hold on the rest of his life.

When his condition started to affect his everyday life from needing to use a walking aid, having meals on wheels, having carers for his activities of daily living – my Dad would never complain (although he was stubborn and would never admit it) and lived his life to the best of his ability that his body would allow him to. He eventually became too unwell so was taken great care of in a nursing home for a period of time but sadly deteriorated after developing an infection later on this year (2016) where my family and I sat with him for many hours and days until he passed away on the 25th October 2016.

Parkinson’s Disease is a progressive neurological condition that causes a chemical dopamine produced in the brain to slow down movement by the loss of nerve cells. One person in every 500 have Parkinson’s which is around 127,000 people in the UK.

Please donate anything you can to help those who have also been affected like my Dad so new research can be funded and in helping to find a cure one day in the future. It really means the world to me, my sisters and all our family to know there is support – thank you for your generosity and taking your time to donate.

All donations will go straight through to Parkinson’s UK via this Just Giving page.’